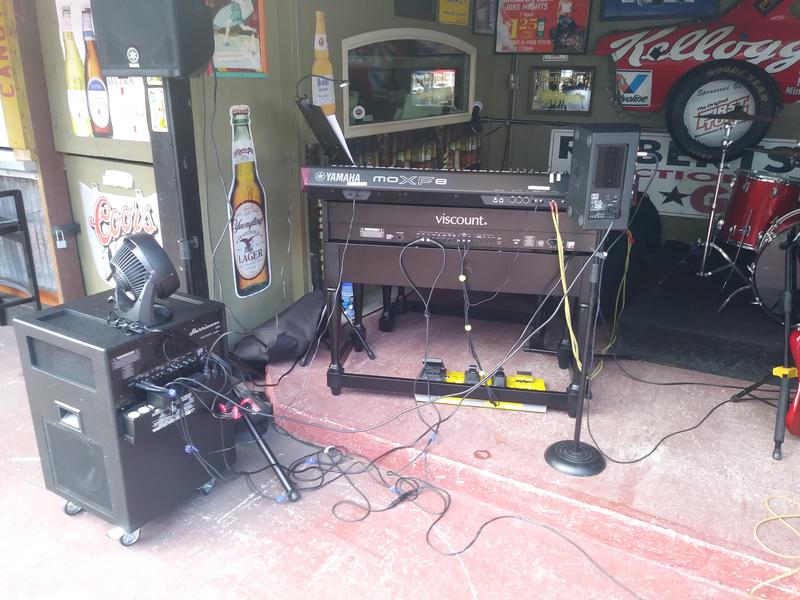 Wow, love my new Viscount Signature Series Black Legend Organ and Viscount Hurricane Speaker. This last Saturday I played at the First Turn Steakhouse in Port Orange, FL.my first gig with the Legend and Hurricane 210 amplifier. Got to tell you that that organ looks great set up on stage. The gig like many here was outdoors, large bar and dance floor with seating for several hundred people. The Legend sounded killer and the amp just killed it as well.I got a couple of anxious looks from our guitar player when we cranked up a little, that Hurricane kept pace with that Marshall and I still had plenty of headroom at the amp.

I had several people, musicians included come up to the stage to take a closer look at the organ, everyone who took a look thought it was a B3 which is funny since in bold letters in the front it says Viscount.  It was fun telling them it was a signature model Viscount from Italy. The Hurricane garnered attention as well; again several people came up to me and said they thought that mini Leslie was neat.  I let Silvio Della Mattia in Italy know how great the Hurricane performed, he was pleased.

Can't thank you enough Vince for the great deal and service you provided with regards to the purchase of the Viscount. Moving to the Viscount from the Hammond SK2 (which I love playing as well) is for me a great step up in terms of presentation and quality of sound. I just love that Legend, who wouldn't.

Thanks again Vince, when it comes time for that B3 I will be calling.